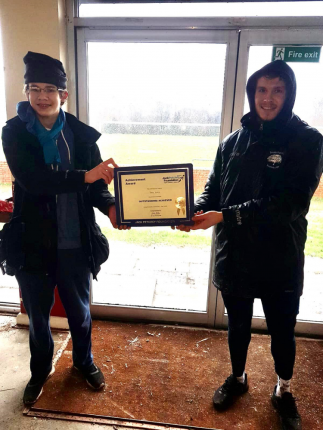 Over the course of several Saturday mornings, Toby worked hard to renovate the derelict club house and update the grounds. Work has included stripping walls, removing old floor tiles and constructing goals. The work is still ongoing but once complete the transformed club house will be a welcome sight for club members and visitors alike.

Toby was nominated for the award by the club founder, Josephine Mayendesa, for his energy and positive contribution to the renovation project. Each year, over 12,000 Achievement Award winners are recognised through the Jack Petchey Foundation for a variety of activities, including fundraising for charity and volunteering in the local community. The awards recognise those who have gone above and beyond to achieve and Toby is a worthy recipient.  As well as receiving a certificate and pin badge, Toby also receives a £250 grant which he is giving to the club to spend.

Says Toby: “I was so excited to receive this award. I don’t play football for the club but my brother Jesse does, which is how I got involved.  It’s been brilliant working on a project to improve facilities for the benefit of local young people.”

AFC Lewisham is a small, grassroots family run club which was formed in 2012. The club recently secured Gresham Sports Ground as its home ground and everyone involved is excited to be building a club that will encourage more youngsters to take up the game of football.