Y13 leaver Emeka looks back on his time at Colfe’s 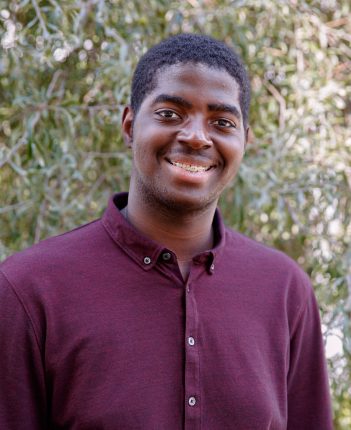 Emeka Izunwa joined Colfe’s in Y12 as a Leatherseller Scholar from Conisborough College. As he embarks on life beyond Colfe’s, Emeka reflects on his time at the school.

“It looked like the door was closing on me coming to Colfe’s. My entrance assessment to join the sixth form did not go as well as I had hoped, however when I opened that envelope on results day at Conisborough College, my GCSEs were much better than expected. I called Colfe’s and they offered me a place at their prestigious school with an excellent reputation.

I was fortunate to arrive in September 2020 with three friends from my secondary school, but I quickly integrated myself into the Colfe’s family. The Y12 Adventure Day helped, rock climbing and building rafts were great activities and I made lots of new friends. I still have some water in my ear from getting drenched in the lake.

A Levels in Biology, Maths and Drama were not what I was expecting, I underestimated how demanding they would be. After GCSEs in 10 subjects which were relatively straight forward for me I thought three A Levels would be a breeze, but was I mistaken. I had to stay organised, complete homework on time, revise for exams and juggle extracurricular activities, but I like a good challenge. Besides, as the Colfeian motto goes “ad astra per aspera” – through hardships to the stars.

I became a proud member of the Equality, Diversity and Inclusion (EDI) Group where I had an interview with the Headteacher, Mr Russell alongside other EDI members, about our experiences at Colfe’s. The Allyship workshop by Joanna Abeyie MBE was insightful as it looked at what makes an ally and allyship in the workplace. More recently, the group organised a range of fundraising events for the charity, Hope and Play. In Year 13, I have worked with Mrs Bean as the Careers Ambassador and have introduced the ‘Emexcellent Advice’ column for the careers newsletter.

Drama has been a huge part of my time at Colfe’s, both as an A Level subject and extracurricular. I will forever remember playing Eugene in our epic production of Grease! – the first live performance open to parents since lockdown. I’ll always love the song Shaking at the High School Hop which is still stuck in my head.

My passion for performance led me to audition for the National Youth Theatre with a monologue of Aaron the Moor from Shakespeare’s Titus Andronicus. After months of nail-biting and frantically checking emails, I got in! In August, I have the Senior Intake course in Northampton for two weeks, I heard it’s an experience of a lifetime, I can’t wait.

After completing my A Levels (fingers crossed I do well) I was lucky enough to get a summer work experience placement in the Admissions & Communications department at Colfe’s. I feel fortunate to have gained skills and work productively in my summer holiday.

Looking to the future, I hope to complete a Cognitive Neuroscience and Psychology degree from the University of Manchester and attend drama school afterwards with aspirations of becoming a professional actor.

I know this summer will be one to remember.”