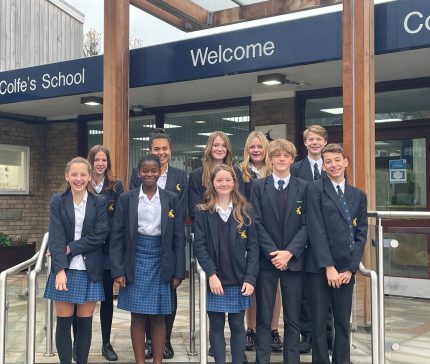 Year 10 pupils Jakab, Lily, Henry and Jack have been chosen to represent in regional water polo. As part of the selection process, the pupils had to attend a session in London where they undertook various tests including swimming, ball skills and match play.

Lily, selected for the Girls’ U15 team, said “Out of 50 girls, I made it down to the last 15. I’m so excited about this opportunity and I’ll be training every Friday for the nationals.”

Jakab will be training with the Boys’ U15 team as part of a 12-week programme and attending the Swim England Water Polo National Age Group Championships in Sheffield this month.

Jack, in the Boys’ U16 team, added “I’m really looking forward to working with the team and have already taken part in the U16s Inter-Regional Championships, which involved  a weekend away in the West Midlands.”

After missing a number of trials due to Covid-19 restrictions, Roshie (Y11) was finally able to attend selections for the London and South East Netball squad. Thousands of people try out for county netball every year, but the competition is tough – this year around 300 applicants were successful. Says Roshie “I am really excited to have the chance to play at county level. There are 12 different hubs and I train once a week for two hours. Most of all,  I’m looking forward to the inter-hub tournaments, which start in January.”

Director of Sport Nicci Rayes said “This is fantastic news. Everyone has worked really hard to excel  in their chosen sport and their success at regional and county trials is fully deserved.”