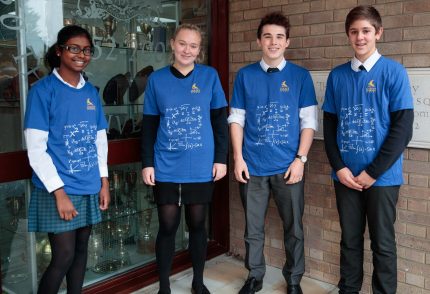 A team of four Colfe’s pupils have come top of their group stage in the prestigious Hans Woyda Mathematics Competition after a run-away success against Bromley High School.

The team, consisting of Simone (Y13), Dan (Y12), Panos (Y11) and Isha (Y9), had already secured victories against Alleyn’s School and Eltham College and needed one final win against Bromley High School to be placed first.

They began well by winning the starter round eight points to two points and continued to increase their lead with every round. The final score was an incredible 55 points to Colfe’s and five points to Bromley High School.

This was the team’s biggest win of the competition so far and means they will go through to the knockout phase, which starts in January.