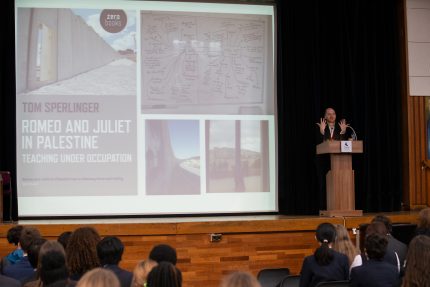 We recently welcomed author Tom Sperlinger to speak at the John Glyn Society about Romeo and Juliet in Palestine: Teaching under occupation.

“As an English student, I’ve been fortunate enough to study the works of some of the best authors and poets of the last few centuries, from Attwood and Mansfield to Shakespeare and Duffy. However, although many of them do touch on personal experiences and views, none of them had placed their story in a different context. Romeo and Juliet is not a unique story: the two tragic lovers separated by family quarrels was not dissimilar to what I read about in Die Schone Idea by Robert Ayler and various other pieces from around the Shakespearian age. But placing such a classic story in the context of a political event as deep-running and divisive as Israel and Palestine, Tom Sperlinger’s talk was one of the most engaging John Glyn’s I’ve ever been to and his book on the same topic is, thus far, one of the most interesting books I’ve ever read.

Admittedly, I have a tendency of getting too political, something my English teachers will likely attest to, but I’ll try to focus on the talk. In short, the Israel–Palestine is a conflict I have always had interest in, be it within my course or independent study outside of it. I have always maintained a firm pro–Palestinian view and, while knowing the contours of the conflict run deep, I was incredibly heartened to learn that even if their governments are at war everyday Palestinians and Israeli’s still open their arms to their neighbours in hopes of friendship. I guess you could argue that is the essence of Romeo and Juliet, two people hoping for friendship, or rather love, when those who represent them, or their family, want anything but. It is important of course, as Sperlinger mentioned, that the international politics and bureaucracy

we see on the news does not reflect the hearts and minds of those on the ground and the wills of families did not represent how Romeo and Juliet felt. I was particularly engaged by Sperlinger’s personal account of his time teaching in Palestine, and the close bonds he formed with students, which shed light on “western normalities” we take for granted. I’m British and live in London. When I walk to school, I don’t have to worry about tear gas or rioting or police brutality or oppression, I simply worry about the rain. Sperlinger’s talk was not just engaging but important, because it provides people with a perspective on amenities such as the education we take for granted or the journey we take to school; learning about the lives of Palestinians gave me access to invaluable knowledge about the conflict and perspective on my own life.

Additionally, as a History student and a keen follower of domestic and international politics, it was enjoyable and important to have someone come in and discuss the occupation and ongoing conflict who knew what they were talking about from a personal and historical perspective. In an age of increasing populism and the feigned ignorance of many Western leaders as to the damage their alliances and arms dealings with dictators, I believe education and talks like these are key to informing a safe future for all of us.

In summary, I think this talk was a vital experience for me in expanding my perspective both on the Israel–Palestine tensions and my understanding of Romeo and Juliet. Knowing that their families didn’t represent their hearts in the books is one thing, appreciating the love those in Gaza and the West Bank feel despite the occupation is quite another.”