The Gambia Project – a success story

In October half term, 16 pupils and staff visited our partner school in the Gambia. The programme saw pupils assist in building three new classrooms to help reduce classroom sizes from 80 to 60.  They travelled on ancient ferries and walked across a bustling border to enter Senegal for a game reserve drive.

Now in its 15th year, the project is an important part of Colfe’s history and ethos. Pupils take part in a rich cultural exchange and get to see first-hand living, working and schooling conditions in a developing country. For most of our pupils, it is a real revelation and they come back with a redefined view of the world and their place in it. The project has contributed significantly to the attitudes, values and development of our own pupils and is an experience which stays with them long after the flight back home.

Last term, Colfe’s was pleased to welcome one of the Gambia ex-pupils Modou Demba to the school for a visit. He arrived in the UK to share his personal story of how The Gambia Project has brought life-changing benefits to himself and the children of the Kotu School.

Colfe’s has sponsored Modou through his education at Kotu School since 2004. Once he graduated from the school, Modou worked as a guide for pupils arriving from Colfe’s both welcoming and acclimatising them to his community’s way of life. He then went on to work in the travel industry after being sponsored by Colfe’s for his professional development.

Modou said, “I am very happy to be here and say a special thank you to Colfe’s School and meet the people who changed my life and contributed immensely to my development. Colfe’s changed my community and the way people look at my community, and it is fantastic to say that Colfe’s made people’s dreams come true.”

By far the most important aspect of the trip is the fundraising that each pupil carries out to help finance the ongoing project. Over the last decade and a half, Colfe’s pupils have funded the building of a school hall, a home economics lab, boys’ toilets, a two-storey classroom block and an all-weather play area, and refurbished many existing buildings. 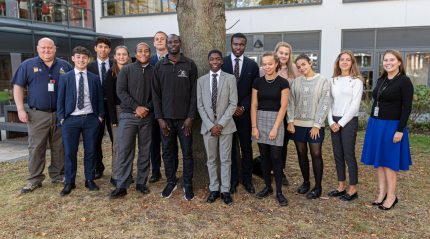