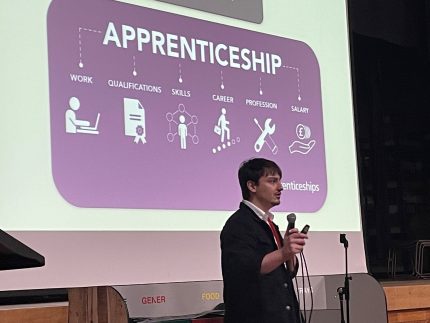 Lewisham resident Nico has been working at Google in the Digital Marketing Team over the last year, focusing predominantly on the map app, Waze. Nico explained that, despite being a grammar school pupil, he found school and further education a challenge due to a hearing impairment.

His route into the technology sector came through an apprenticeship at Google, where he recently graduated with a Merit. Nico explained the different pathways within digital marketing and gave pupils a fascinating insight into what it’s like working for a technology giant like Google.

Teacher of Computer Science Mrs Li Sue said, “Technology has played a key role in enhancing Nico’s life and it was really interesting to hear how this inspired him to pursue a career at Google. Our pupils asked some great questions, so I hope this has given them a better understanding of the different options available to them after they  leave Colfe’s.”