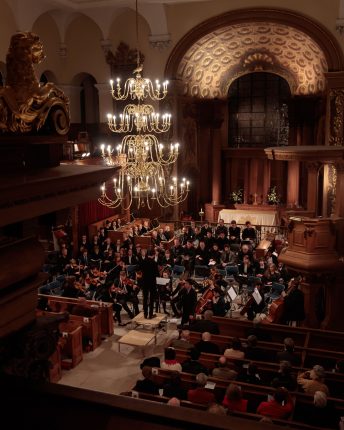 Colfe’s annual Autumn Concert at St Alfege’s Church proved a resounding success – with over 100 pupils, parents, staff and friends coming together for a magnificent rendition of Vivaldi’s Gloria.

Headmaster Richard Russell said “At least six decades were represented in the massed choir for the Gloria. The result was magnificent, with pupils, staff, parents, grandparents and many friends of the school all playing their part. It was also a delight to see our A-level musicians performing so well the various works in which they have been engaged this term. Special thanks to Ellie, James, Leo and Max. It was a great evening for the school in a suitably magnificent venue.”

Deputy Head and performer Donna Graham said “I was so proud of all our musicians at the beautiful St Alfege’s Church in Greenwich, but in particular the pupil soloists who played and sang with such confidence and musical maturity. From the opening Fanfare to the final note of Vivaldi’s Gloria the evening was a real treat for the soul.”

Director of Music Benedict Holmes said “‘The pupils have worked extremely hard all term and their efforts were rewarded with a fantastic performance, full of energy and character. Each and every pupil involved was a credit to the department and contributed to making the event a great success.”