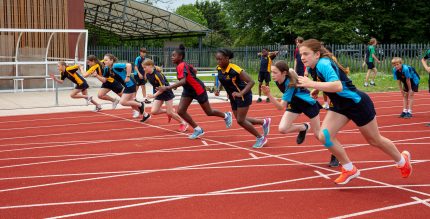 The summer term has seen a return to a calendar of sport and both Junior and Senior School pupils have enjoyed fun-filled, action-packed sports days.

Over several days, the school field was a sea of blue, red, green and yellow as Junior School pupils wore their house colours with pride. Younger pupils took part in a range of activities to win house points, including an obstacle course, bean bag throwing and mini javelin, while older pupils took part in sprint races, an assault course and a tug of war. The winner of the EYFS & KS1 House Cup was Aquila and the KS2 winner was Lynx.

“Well done to everyone who participated in the Junior School sports days”, said Mr Kimberley, Master in charge of EYFS/KS1 PE. “We saw fantastic teamwork and the effort levels were brilliant. Congratulations to Aquila and Lynx!”

Meanwhile, Senior School athletes took to the track at Sutcliffe Park for Colfe’s Athletics Championships – breaking 19 school records and impressing staff and their peers with stamina, energy and commitment.

The highlight of the event was the 100m challenge race, which included the fastest 100m girls and boys from each year group, handicapped based on the time they recorded for their individual events. Denny (Y12) started at the back of the line-up and finished strongly in this event and then in the last leg of the 4 x 100m relay, where he pipped graduate sports assistant and former Colfeian Joe Gardner. Other stand-out performances were from Emily (Y8) and Ben (Y12) who both set three new school records.

Back at school, House Sports Days took place in the last games lesson of the year. Events included sprints, round relays, targeting throw, standing long jump and triple jump. Each session ended with an exciting tug of war between the houses. The spirit and determination shown by pupils to collect coveted house points was impressive. Bramley and Beardwood tussled for the top sport in most age groups, under the direction of Mr Fielden and Miss Manzi. Mr Fielden even competed in the tug of war to support his team!

Nicci Rayes, Director of Sport, said “Despite the weather and the disappointment of being unable to welcome parents to our sports days this year, the events were great fun for all participants. Pupils performed fantastically and they should be very proud of themselves.”

Photographs are available to parents via MyColfe’s.