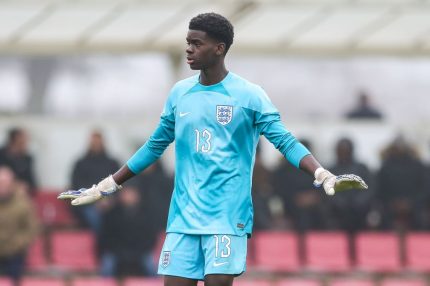 There has been much to celebrate on the sports field at Colfe’s recently, with notable achievements from current and former pupils in a range of sports including football, tennis, athletics, fencing and rugby.

Talented Year 10 footballer Khari has been selected for the England U16 football squad. Khari’s first match for England, played at the St George’s Park national team ground, was a comprehensive win of 4-0 against opponents Turkey. Khari’s England call-up followed a trip to Brazil where he competed as part of the Arsenal team in the prestigious Adidas Flamengo cup, where he was the only U15 player in a team made up of U16/U17s.

After a season of athletics excellence, Year 10’s Gabby has been awarded the inaugural Bridget Yule Award for Combined Events. This London School Athletics Association award honours the athlete with the best performance in the Combined Events over the season across the London region, and is a fantastic achievement.

On the tennis court, Alex (Year 8) is flying in a Tennis Europe European tour event U14 category, causing an upset by winning his first match 6-4, 6-2 against the U14 Portuguese No. 7 competitor. The tournament is the main tour for top European junior tennis players, with former winners including such figures as Andy Murray.

After taking the U14 Surrey Youth Epee fencing title, Year 8’s Thea has been selected to fence for the England national team, with her first competition taking place in Croatia in April.

Meanwhile, Old Colfeian Nicholas Sydorowitz continues to make the school proud in the field of rugby. Nicholas first discovered his love of rugby when he joined Colfe’s in 2017. Now aged 22, he is a player for the Brazilian National Rugby League team, currently battling it out for the next stage of the 2025 World Cup.

“We are incredibly proud of such excellent achievements from these fantastic young sportspeople.

Khari’s progress in football has been outstanding. Not only was he selected for the Adidas Flamengo tournament as the youngest player in Arsenal’s squad, but now to get an England cap at the age of 15 is tremendous. We can’t wait to see what his future brings.

What a start to 2023 for Thea – U14 Surrey Youth Epee fencing champion, and now an England team call-up for her too is just brilliant.

I am absolutely delighted for Gabby. Her award is an exceptional honour, and reflects all the dedication she brings to athletics. It’s a terrific showcase for the variety of disciplines within track and field athletics, and we are so proud that the very first recipient of the Bridget Yule award goes to a Colfe’s athlete.

Alex has demonstrated great skill and determination in winning his opening match of the European Tour so convincingly against such a high-ranking player. We wish him success with the rest of the championship.

Nicholas only truly discovered his love of rugby when he joined Colfe’s, and we are so proud of the level he has risen to in the sport. Our highest priority is instilling a love of sport into all our pupils when they join Colfe’s, whatever their sporting backgrounds and whether they join us at Nursery, Senior School or Sixth Form. Achievements like these are the most rewarding thing in the world.”