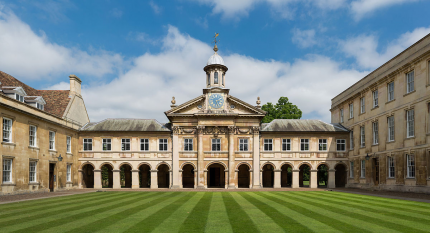 Colfe’s saw a record number of interviews for Oxbridge this year which has resulted in ten students receiving conditional or unconditional offers from Oxford and Cambridge, including an additional two from last year’s Year 13.

The total for the current Year 13 equates to 10% of the year group which is by far and away our most successful performance as a school for many years. The list of offer-holding students includes two scholars who joined us in the sixth form, pupils who have been at Colfe’s since Y7 and others who have been at the school since nursery. Congratulations go to all students who were invited to interview – a huge achievement during an incredibly challenging year.

All the Oxbridge offers are for highly competitive courses, including Maths at Oxford and Natural Sciences and Medicine at Cambridge. The list is as follows:

Claire Le Hur, Colfe’s Oxbridge Co-ordinator, commented “I am delighted by the number and varied subjects of the offers this year. This is testament to the incredibly intelligent and hard-working students in Year 13 and also to the staff who helped them with enrichment work, test preparation and mock interviews. Remote interviews were a completely new experience for all and especially tough; our students handled these in a calm and confident manner, most even said that they enjoyed them.”

Headmaster Richard Russell commented “This is a step change for Colfe’s and a fair reflection of the academic aspiration that has driven so much of what we have achieved in recent years. Our pupils are increasingly ambitious and appropriately so. We have been hugely impressed with the positivity of all our pupils since last March: in the case of Year 13, that has included remote engagement in the UCAS process, culminating in online interviews in December and during this term. The wonderful range and diversity of offers that we have seen this year is just reward, not only for the students themselves but also for the staff who have supported them so magnificently. We are immensely proud of all our students and their drive to succeed in whatever path they have chosen.”