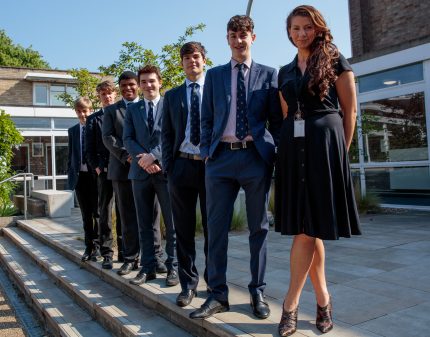 Six pupils from the Senior School have fought off fierce competition to be invited to join the prestigious National Youth Theatre of Great Britain.

Actors Ollie (Y13), Ally (Y13), Zac (Y12), Dan (Y11) and Laurie (Y9) will now attend a three-week residential course with the National Youth Theatre over the summer, along with Tyler (Y10) who auditioned for technical theatre. On completion, all six will become company members and granted access to exclusive castings and performance opportunities.

Colfe’s put forward a record number of 36 pupils for this year’s auditions, which took place in at the school in February. The process includes a three-hour group workshop followed by an individual performance by each applicant.

Year 10 pupil Tyler commented “This was my first attempt at auditioning for the National Youth Theatre. I wasn’t expecting to be offered a place but was delighted when after a few tense months of waiting I was invited to the Summer 2019 backstage course.”

Director of Drama, Natalie Maher said “I’d like congratulate all those who auditioned – but especially our successful applicants. Over 5,000 young people audition for only 500 places so I am thrilled that six of those have been given to Colfe’s pupils. I have no doubt that they have a very bright future ahead of them.”