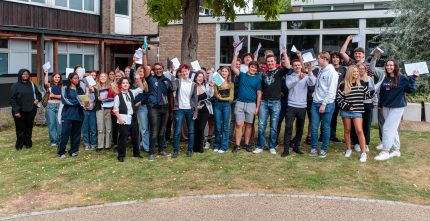 Colfe’s students and staff are celebrating record A-Level results (2021 not included). The results are particularly well deserved as this was the first set of public examinations for the year group after the disruption and uncertainty of the previous years.

88% of grades awarded were A*-B with 71% A*-A – eighteen students achieved straight A* – 98% will attend their chosen university including Russell Group, other leading competitive universities, Medicine and Oxbridge.

Course choices remain as diverse as ever: as well as traditional options such as English, Mathematics, History and Medicine, Colfe’s students have chosen to study a range of subjects including Liberal Arts, Nuclear Science and Materials, Game Design and Production and Sports Journalism.

Simon Burton A*/A*/A, outgoing School Captain will read Economics at Bath University “I joined Colfe’s in the junior school, during my time here the teachers have been so supportive, I really think that’s what makes us stand out from the rest – the huge amount of care and time the teachers bring – I wouldn’t have been able to achieve this without them, my friends at school and my parents”. Luella Saunders, who joined Colfe’s in Year 7 and will now go to Exeter to read PPE having achieved A*/A*/A*, was also delighted “We have been so well supported since the start of the pandemic – everybody seems to have done so well.” Twins Jenny and Rachel Pham who joined Colfe’s from Addey & Stanhope School in the depths of the pandemic both achieved A*/A*/A*/A* and will read Computer Science at Kings College, London. Rachel said “ It’s hard not to be driven by the environment at Colfe’s, you have so many good teachers around you”, Jenny added “we really enjoyed being part of the EDI (Equality, Diversity and Inclusion) group, it’s a great way to raise awareness and a good space to discuss things.”

Headmaster Richard Russell said: “This year’s A level students have shown amazing resilience, engaging positively with two protracted periods of online learning over the last two years and eventually triumphing in the first public examinations that they have ever experienced with the highest proportion of top grades that the school has ever achieved. We are immensely proud of them all. Huge credit and congratulations are also due to their teachers who have seen examination goalposts shifting more or less constantly over the last two years whilst simultaneously providing pastoral care of the highest standard to all our pupils.”