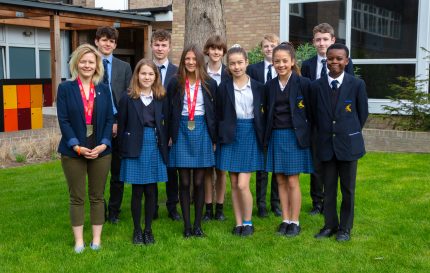 Huge congratulations to a number of Colfe’s teachers and pupils who took part in marathons across the country over Easter. 26 gruelling miles of streets were pounded by Benedict Holmes, Director of Music who ran for The Alzheimers Society in the Manchester Marathon. Laura Dunster, Teacher of Psychology and Science, ran for New Hope Uganda and Onor Crummay, Head of History, ran for Meningitis Now in the London Marathon. They managed to raise over £3,000 in total for their charities.

Benedict Holmes said, “The Manchester Marathon was a superb event – well organised with great support and a fantastic atmosphere, which came in very useful during the final few miles! This was my marathon debut, and the first time I had run further than 20 miles in one go. It is often said that the marathon really begins at mile 20… I can confirm that this wisdom is entirely true! My legs certainly learned the hard way…”

We are also very proud of our pupils (photographed) who also took part in the Mini Marathon part of the London Marathon – well done to all!