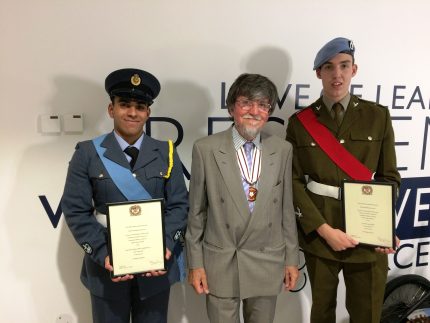 Congratulations to Old Colfeians WO2 James Green (2011-2016) and Cadet Warrant Officer Matthew Arawwawala (2011-2018) who have been presented with Lord Lieutenants Cadet Awards by the Deputy Lieutenant for the Royal Borough of Greenwich, Dr Pieter van Der Merwe MBE. These prestigious accolades are at the discretion of the Lord Lieutenant for London and are awarded to just a handful of cadets nationwide annually.

WO2 Green and CWO Arawwawala have both enjoyed a long and fruitful career in Colfe’s Combined Cadet Force. Both gained many qualifications and experiences along the way. James was selected as the senior staff cadet on the Army’s annual Royal Canadian Cadet Exchange – a six week overseas trip to some of the most remote places in Canada and Matthew completed the Air Cadet Leadership Course at RAF Cranwell.

Cadet Warrant Officer Matthew Arawwawala said “It was a very unexpected surprise to be recognised at a regional level. I think it reflects on the exceptionally high standards that the squadron uphold.”

Contingent Commander Capt. Russell Joyce said “As one of my first duties as the new Contingent Commander, I was delighted to welcome the Deputy Lieutenant for Greenwich to Colfe’s to present WO2 Green and CWO Arawwawala with their awards. Very few of these are given nationally, so to have two awarded to Colfe’s cadets is testament to the hard work, selfless commitment and sustained effort that both have put into our squadron over the past few years. I am delighted for them and wish them well in the future.”