Old Colfeians in the Press 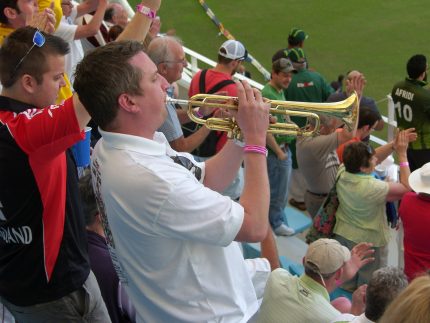 Three of our old Colfeians have made it into the news this week. BBC Sport reported that after rousing England’s fans and players alike with his greatest hits, Billy Cooper (OC 1997), the Barmy Army’s trumpet player, has decided to call it a day. The classically trained musician has been a regular sight and sound in cricket grounds the world over for the last 16 years.

Claire Rafferty (OC 2007) was interviewed in the Daily Telegraph about adapting to life after ending her professional football career. Having played for West Ham and Chelsea (she is still Chelsea Women’s longest-serving player), Claire has since recently been working as a partnership sales manager.

And finally, Susie Rowe (OC 2005), former teacher and daughter of a former Math’s teacher at Colfe’s, returned to County level cricket at Kent. Rowe said: “The profile of Women’s cricket has massively grown in the past few years and it’s been fantastic to see.”