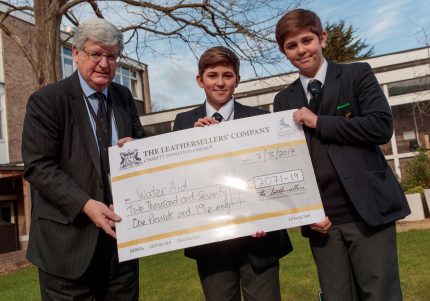 58 Colfeians have taken part in a sponsored swim after a geography lesson inspired one pupil to raise money for the international charity Water Aid.

Alexios Philalthis (Year 7) organised the event after learning how the charity provides the poorest and most marginalised people in the world with access to safe water, sanitation and hygiene.
Pupils from both the Junior School and Senior School joined Alexios in his mission to swim as many lengths of the pool as possible in an hour. The final count amounted to an incredible 5,181 lengths and their efforts have so far raised more than £1,600.

Alexios said, “I learnt about Water Aid for the first time in Mr Newell’s geography lesson. I couldn’t believe that there were people in the world that still don’t have access to clean water. As I’m a member of Colfe’s swim squad I thought that organising a swim-a-thon was a great way to raise money.

“The school and my family, especially my brother Panos who is in Year 9, have really helped me. On the night I was so surprised at how many pupils turned up – even those who don’t normally swim with the squad. I hope a lot more people know about Water Aid after taking part.”

Head of Swimming Sarah Manzi said, “Alexios reached out to the Colfe’s community and their response was amazing. I’m very proud of them for raising such a lot of money for a great cause.”

You can learn more about Water Aid at www.wateraid.org.