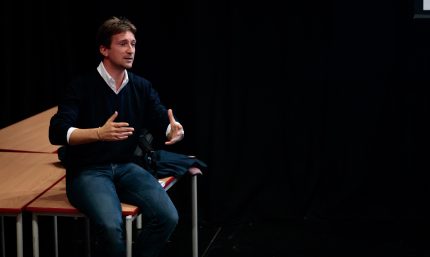 “It was a pleasure to have the renowned classicist Dr Michael Scott (Warwick University) talk to the society’s members about the history of Greece as the first John Glyn presentation of the academic year. As expected of someone who has a vast amount of experience in teaching, his lecture was interesting throughout, both interactive and gripping.

To start with, he asked for various members of the audience to describe what they associated with Ancient Greece; positive and praiseworthy things were generally said, such as ‘revolution!’. After this, however, he completely deconstructed the idea of the fantastic place that we had in mind, and replaced it with something best described as the ‘gritty realities’ of Ancient Greece.

He began this by saying that Greece actually experienced widespread poverty throughout classical history. He gave a graphic account of all of the issues that were embedded at the heart of Greek society,  such as malnutrition caused by the lack of variety in their food; the fact that they were always at war, which resulted in older people almost always bearing injuries; and the diseases that were rife throughout their land. This all contributed to a shockingly low life expectancy of a mere 25. The reality of Greece was shown to us to be a rather hellish place in which none of us would want to live.

Despite this, we have always considered the Greeks to be so admirable – why was this? He explained that the Greeks themselves had an extremely complex and competitive society, which tended to result in them always trying to achieve impossible perfection. They tried to surround themselves with the concept of perception, as if to forget about the ‘gritty realities’. One way that they did this was by making all of their statues and sculptures as aesthetically pleasing as possible. Dr. Scott explained to us that they even integrated some impossible anatomies into many of their human statues.

Furthermore, at symposia (ancient drinking-parties), the cups of alcohol were purposefully constructed so that they would be difficult to hold and drink from. They even painted designs on the cups which were meant to prompt consideration of the perfect ideology that they strived towards. Some had eyes, as if they were judging whether your actions lived up to Greek ideals; another showed a man disgracefully vomiting, which implied that you should not follow his example if you wanted to maintain your dignity. He also spoke a lot about this philosophy as used in the Olympic Games. It was a much less civilised affair than it is today, since the sports were of a much more violent nature; there was one, the pankration, where you could attack the opponent as you saw fit, as long as you didn’t gouge their eyes out! Some people even sent their slaves to the Olympics as punishment, which goes to show how horrid the event really was.

The description of Ancient Greece as offered by Dr Scott certainly opened our eyes to lesser-observed truths, and got behind the façades that the Ancient Greeks put up to cover weaknesses. It was a lecture of the highest calibre!”