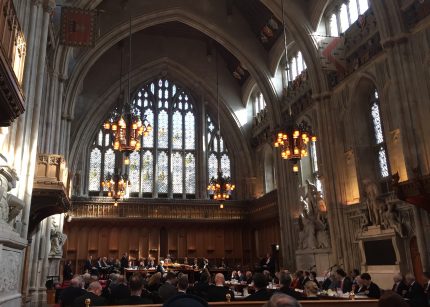 Old Colfeian and Former Head Boy Gregory Jones (1986 – 1989) QC, has been elected as Alderman for the Ward of Farringdon Without and was installed in his position at a ceremony at the Guildhall in London on 9 March.

This is a key position within the Corporation of the City of London, heading up a team of 10 members of the Court of Common Council.

Gregory Jones is the second Old Colfeian – and former Head Boy – to achieve this position, after Sir John Bennet (Head of School 1832), was elected Alderman for the Ward of Cheap in 1871 and subsequently Sheriff of London in 1872.

Headmaster Richard Russell said “Greg is a fantastic role model for our pupils and a great friend of the school. As president of the Old Colfeian Society, he maintains an active interest in Colfe’s and we hear from him frequently. This honour is greatly deserved and will doubtless lead on to even greater things in the future.”

Past Master Leatherseller and Chairman of Governors Matthew Pellereau said “Congratulations to Greg – the first Leatherseller in history to be installed as Alderman of the City – this is a fantastic achievement and we wish him well in his endeavours.”