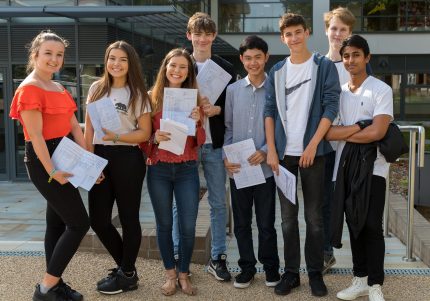 GCSE results at Colfe’s this year have leapt ahead of the school’s previous record. A*/A grades are up by ten percentage points, to 62%. And this in a year when the proportion of top grades awarded nationally has actually gone down.

Physics and Latin were the top-performing subjects with 94% and 83% A*/A respectively. Mathematics was once again amongst the top performers with 75% A*/A.

The performance of boys improved markedly. This is a direct result of innovations in the way Colfe’s monitors their progress and sets targets with them.

Headmaster Richard Russell was delighted. “These results constitute a real step change for the school. We changed the reporting system this year to focus much more sharply on effort and how hard pupils were working. It has clearly paid off, especially for the boys. With such a high proportion of pupils gaining so many top grades, the prospect for A-level in two years’ time is exciting. Teachers and pupils have much to celebrate, and I congratulate them all on this highly successful outcome.”

Michael (at Colfe’s since Year 7) said, “It has been a lot of work over the last two years to get here. The support of the teachers was amazing; it helped get me through and get these great results. It also means I’m especially looking forward to Sixth Form.”

Lydia (at Colfe’s since Year 7) said, “I am almost speechless! In a nice way it’s made my decisions about the future more difficult because suddenly I have so many options. The build-up to the exams was nerve-wracking, but Colfe’s is great and I’ve loved my subjects. I can’t wait to move on to Colfe’s Sixth Form.”

Max (at Colfe’s since Reception) said, “I’ve worked hard and done myself proud. Getting 398 points out of 400 on my Geography paper was just amazing. I’ve been at Colfe’s a long time and it is very exciting to have reached the Sixth Form. I would like eventually work in the City and my results will allow me to do that. I’m already hoping to add Further Maths A-level to my choices of Maths, Politics, Economics and German to give me as many options as possible for the future.”