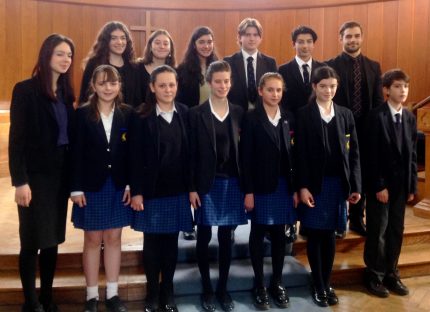 Colfe’s Chamber Choir has won first place at the prestigious Coulsdon and Purley Music Festival – a particularly notable achievement as it was the first time they have taken part in the competition.

The Chamber Choir (Y7-13) received a distinction in the U18 category performing two unaccompanied pieces: Alleluia by Randal Thompson and Ken Burton’s adaptation of By the Rivers of Babylon.

Director of Music Emma Bond said, “The Chamber Choir is a group of increasingly accomplished singers, and we are seeing great success with more experienced members mentoring the younger ones. Taking part in this festival was a lovely experience, especially as it was so well supported by the many parents who accompanied us there.

The Chamber Choir will be singing the winning pieces at Colfe’s Spring Concert on Thursday 16 March.