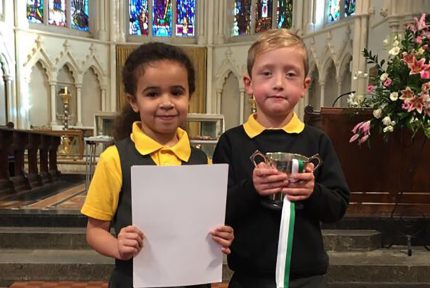 Once again, Colfe’s Junior School pupils triumphed at the annual Beckenham Music Festival, one of the largest amateur competitive performing arts festivals in the south-east of England.

On Saturday morning, both our Key Stage 1 and Key Stage 2 choirs made their way to St George’s Church in Beckenham for the competition. Performing ‘So Long, Farewell’ and ‘Swing Low’, our KS1 choir put in a strong performance. Full of praise for our young singers, the adjudicator awarded an impressive 88 marks, which meant that the cup was theirs for a second year running.

She was particularly impressed with the discipline of the children and their total focus, remarking that this was truly rare of pupils so young.

Our KS2 choir impressed equally, singing ‘My Shepherd and My Friend’, ‘Swing Low’ and ‘Freedom’, scoring 87 marks. This time the adjudicator remarked that the children gave an excellent performance with effective dynamics, great energy and enthusiasm and with an unforced beautiful tone. Despite being pipped at the post for first place we were delighted and very proud to finish as runners up.

Mrs Gurr, Head of EYFS and KS1, commented: “We are so proud of all of the children who took part. They were up against some stiff competition and put in an outstanding performance. Thank you to the Junior School Music Department for their inspiration and guidance.”