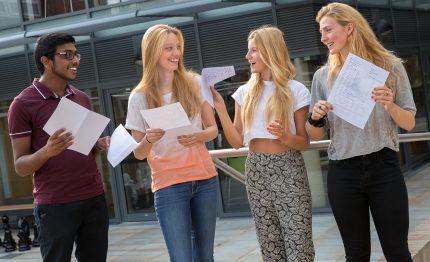 Upper Sixth leavers were delighted with their success, including all six who applied to read Medicine (a notoriously competitive subject) at university next year. Oxbridge success included places in Modern Languages and Medicine.

The sciences required for entry to medical school and Modern Languages are regarded as academically demanding subjects. So too are Further Mathematics, Physics, English Literature, Spanish and German, where all grades at Colfe’s were B or above.

In keeping with the national trend, girls at Colfe’s performed slightly better than boys this year.

Olivia Carruthers-Jones gained three A* grades in her A-levels and is going to Newnham College, Cambridge, to study Modern Languages. She commented, “To say I’m going to Cambridge feels simply unbelievable. I’m not a native speaker in any modern foreign language, which maybe makes it slightly harder, but it was just something I love. I’ve been at Colfe’s since Reception so the school has been all I’ve ever known. The Languages department at Colfe’s are fantastic and made studying the subjects a real pleasure.”

Andrew Ravendren joined Colfe’s in the Sixth Form from Conisborough College as a Leathersellers’ scholar. He has achieved an A* and three A grades and will read Medicine at his first-choice university, Imperial College, London.

The Leathersellers’ Company, which governs Colfe’s School, has provided £1 million to fund scholarships in the Sixth Form for academically outstanding pupils from local state schools.

Andrew said, “I am so happy and pretty proud of myself! The step up to Sixth Form in a new school has been challenging because it’s new people and a new set of routines, but Colfe’s has been very supportive. I would tell anyone who has the chance to come here to take it because it will give you the confidence to achieve more than you could believe – and you will also make some great friends. When I was little I used to see doctors on television and think, I want to be one of those. Now Colfe’s has set me on the path to make that a reality.”

Caroline Hedley, 2016 School Captain, gained two A* and two A grades and will study Medicine at Manchester University. She said, “I’ve wanted to be a doctor since I was four years old – I had a white coat, a toy doctor’s bag and a badge which said Dr C! – so I am just so grateful to Colfe’s (I’ve been at the school since Year 1) because they’ve helped make this happen for me. I’m delighted that I am repaying the support and trust by having achieved my ambition to study Medicine.”

Susan Rowlands is the mother of School Captain Will, who has gained three A grades to qualify for reading Economics at Bristol University, his first choice. She commented, “It feels like yesterday that Will started in Nursery, and there are lots of happy memories. Other mums and I were looking at some notes that teachers made about our boys in Year 2 – they were incredibly accurate about what our children’s strengths and personalities were. Colfe’s has been a perfect school for Will; the teachers and the Sixth Form team have been so supportive and Will is now where he wants to be – which is fantastic.”