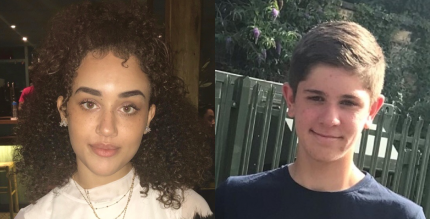 Congratulations to Year 12 students Aleesha and Panos who have been appointed by their peers as School Captains for the 2020-21 academic year.

The role of the School Captains is significant and includes attending numerous public events, addressing prospective parents on open days, liaising between the student body and the school management team, helping in the day-to-day running of the school and acting as mentors to younger pupils.

Says Aleesha: “Coming from another school where I was sometimes doubted by others, I never believed I would get into Colfe’s let alone become a School Captain! I find myself in awe of how many people instil their faith in me and representing such a nurturing school is a huge honour. As School Captain, I hope to inspire others to believe in themselves – put no limits on what can be achieved and live larger than life, all while remaining humble.”

Says Panos: “I joined Colfe’s when I was just three years old and always looked up to the School Captains as role models and aspired to be like them one day. Throughout my time at Colfe’s I have watched the School Captains year after year and have learnt something different and valuable from each of them. I feel privileged to now be that role model who, I hope, younger pupils will look up to.”

We wish Aleesha and Panos the best of luck in their new roles.

Our thanks go to the outgoing School Captains Dan and Tochi and the Senior Prefect Team as they prepare for the next stage of their studies and careers.