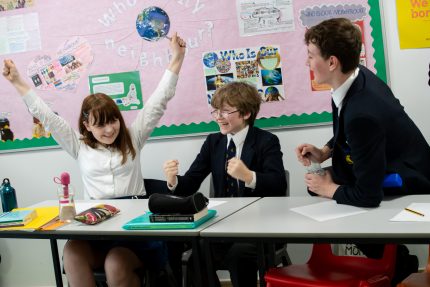 As one of the school’s many extra-curricular activities, pupils from Year 7 to Year 10 take part in House Philosophy. Pupils are split into teams and work together to navigate three rounds of philosophy-related tasks. In the first round, pupils took on challenging questions on logical reasoning. The second round saw the teams connect great historical thinkers to their philosophical doctrines. Finally, the pupils took part in a debating round where they discussed topical philosophical questions, such as ‘does religion have a place in today’s society?’

Teacher of Philosophy and Religion Zoe Kendrick said, “It was a fantastic event. The syllogism round tested pupil’s ability to think logically on their feet and the ‘who said what?’ round tested their wider understanding of philosophy. The debating round built on this with students exploring the topic of euthanasia, resulting in a heated discussion not only about legalisation but also age limitations.”

Bramley House were the overall winners of the competition, with Louise (Y9) and Orlando (Y10) winning individual prizes.

Religion and Philosophy is studied by all pupils in Year 7 and 8 with many opting to continue with the subject at GCSE and A-level.

Aristotelian philosophy is also the basis of our school wellbeing programme. Taught by Head of Philosophy, Emerald Henderson, the ‘Eudaimonia’ lessons discuss virtuous behaviour and are designed to provide a powerful antidote to being obsessed with “social media and superficiality”.

Emerald Henderson said, “This is a wellbeing initiative with intellectual integrity and pastoral appeal. Rather than simply focusing on pursuit of their own happiness, the Eudaimonia programme sees personal flourishing as the by-product of living a morally good life.”

Colfe’s School made a recent appearance in the Telegraph to talk about its ground-breaking Eudaimonia initiative. You can read the article here.