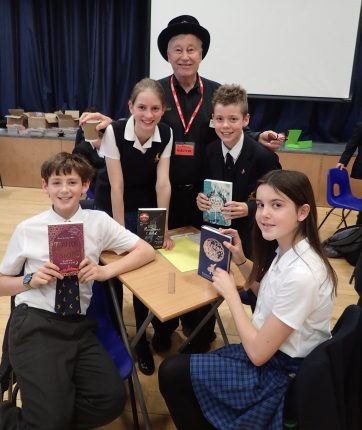 As a result of this the winning team – made up of Isaac (Y8), Katie (Y8), Nico (Y8) and Paloma (Y8) – were invited to compete in the National Final along with 17 other teams from across Great Britain and Northern Ireland. Colfe’s finished in third place, a wonderful result for the school’s first year in the quiz. The second team – Samson (Y8), Polly (Y8), Joshua (Y8) and Holly (Y7) – also travelled to the final and supported their friends enthusiastically.

During the afternoon, pupils also had the opportunity to meet a number of well-known authors led by this year’s Carnegie medallist, Geraldine McCaughrean.

Head Librarian Henrietta Englefield said “I’m delighted at how well our teams performed. Both worked so hard, practising through many lunch breaks, and their commitment really paid off. Despite the growing tension as the competition progressed they all had a brilliant afternoon.”