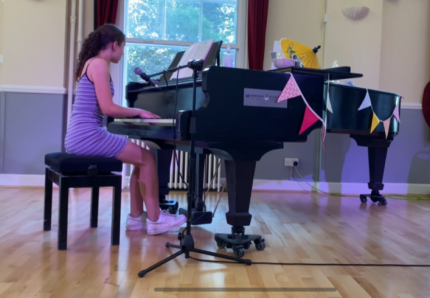 Year 10 pupil, Evie, has won Gold place for her piano composition and vocal performance in a competition run by the Becky Dell Music Academy.

Evie, who has been with the Academy since she was 9 years old, wrote and performed a piece for piano in front of a panel of judges which included German-born British singer/songwriter Tanita Tikaram. Contestants were invited to send in their submissions on the theme of ‘Freedom and Liberty’ and Evie was joint winner in the older age group category.

The composition, ‘Back to Before’, takes inspiration from the book ‘The Cousins’ by Karen M. McManus.

“My song is written from the perspective of a daughter and a granddaughter,” explained Evie. “It deals with reminiscence, absence, loss and finding freedom from the past.”

Tanita Tikarum said “I think Evie has a lovely voice and understands song structure. ‘Back to Before’ is really strong. I would love to hear her play more with the stillness in her voice – and with such a beautiful tone she can really afford to give that tone the space. Well done Evie!”

As her prize, Evie received a £50 voucher to spend on music. To hear Evie’s wonderful performance, go to Becky Dell Music Academy Facebook and Instagram pages.