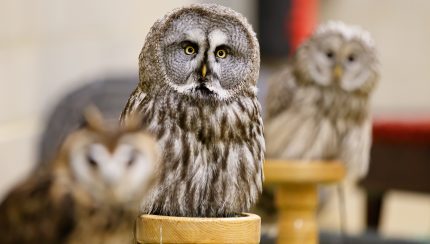 Years 5-8 were treated to a spectacular display from Falconry UK as part of their biology studies on ‘flight’. Year 7 pupils Esha and Esme recount their experience here:

As we entered the sports hall, we were all shocked to see the owls. And then as we got closer to them and started to sit down it hit us just how big these creatures are and how much scarier, they actually seem in real life. They were all so well behaved and as the presentation went on, we thought to ourselves, “if they are this fast here then how fast can they be in the wild when all of their abilities are put to the maximum?”

Secondly, we met Domino, a Spectacled owl. She is originally from the Amazon, and she imitates the perfect sound of a female monkey call. This call will grab the male monkey’s attention and in doing so they will travel towards the source of the sound. When the time comes the Spectacled owl will ambush the male monkey, first eating its eyes!

Esha was given the great honour of holding Domino. “When she first flew onto my glove, I was terrified as she was a thousand times bigger from how she looked while I was sitting down. When I was holding her, a few seconds after she had landed on my arm it started to really hurt and got extremely tired. I think that you only ever really focus on the size of the bird and not the actual weight of the bird. I really wanted to just let my arm come down and rest but I was reluctant as I was worried she might get hurt but most of all I was worried for my safety. What would she do to me? Would she attack me? Would she be mad at me? I then noticed that she had very similar colour eyes to Milo, so I am guessing that she also hunts in the day. Being able to hold her and see her that close up was truly one of the best and scariest experiences of my life!”

After Domino we met Todd, a Lanner falcon. The fastest predator bird in the world.  Unfortunately we did not get to see Todd fly as he is so fast that he will not be able to stop because the hall is too small for him. So, if he did fly he wouldn’t be able to stop, thus making him crash into the wall at 100 miles per hour! It was very unfortunate that we did not get to see Todd in action, but he was magnificent, and you could see all of the muscles that he had in his legs and wings to have the ability to fly at 100 miles per hour.

Esme got to hold Todd “Even though we didn’t get to fly Todd, Todd was very impressive to look at. He was heavier than I expected, and it was impressive to see his powerful claws and beak close up. I was very surprised that Todd was able to fly that fast and I didn’t believe he would crash into the wall if he flew in the hall. Either way it was a great experience.”

And last but certainly not least we met Bluebell, a Great Grey owl. This species of owl is documented to be the largest owl in the world by length. She was by far the biggest of the group. We wondered how heavy she was because she looked extremely big compared to the other birds. In the last few minutes of the session Bluebell flew over all of us in complete silence. I could feel the breeze as she glided through the air not making a single sound. She is the perfect predator as no one would know she was there.

Those were all the wonderful and terrifying birds that we all got to meet. It was truly an amazing experience and one that we shall never forget.