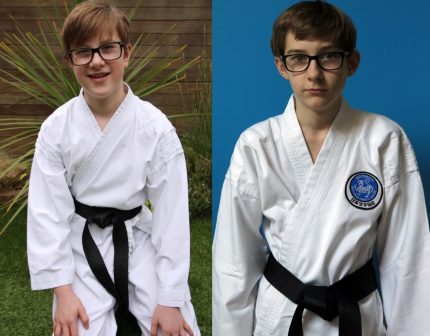 Congratulations to Evan (Y10) and Matthew (Y8) who have both achieved black belts in karate.

On average it takes a minimum of four to five years to reach this milestone making it an impressive achievement for these young Colfeians.

To gain the black belt they needed to perform a set sequence of karate moves, known as kata, which involves steps, turns, kicks, punches, strikes, blocks, throws and various stances.

Says Evan: “I am over the moon. I took up karate seven years ago and this is the goal I’ve been aiming for since day one.”

Matthew started karate at just six years old and it is particularly unusual to become a black belt at his age. He said: “I was thrilled to find out I’d got the black belt. I want to keep doing karate and my aim now is to do 2nd Dan.”