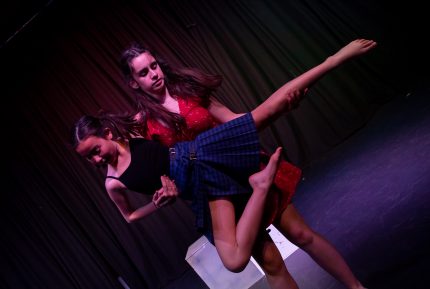 The Beardwood theatre was the venue for the annual house dance competition and once again staff and pupils were entertained by the Y7 – 10 pupil’s dance performances.

The theme this year was ‘Identity: Who am I?’ and inspired some fabulous choreography and performances from the dancers. All the girls had been working hard on performance skills in dance and gym club since December and showed off a variety of dance styles and sports acrobatics.

Performances included a variety of styles from tap, ballet, lyrical and contemporary dance. With a wealth of talent and some fantastic choreography. Lighting and music were operated by Colfe’s pupils. Some tough choices and decisions were made by the judges: Natalie Maher (Director of Drama), Nicci Rayes (Director of Sport), Danielle Sutherland (Teacher of Drama), Donna Graham (Deputy Head) and Chris Morriss (Head of Student Leadership).

Norton were overall winners with a strong mother/daughter duet from Anna (Y7) and Darcy (Y9) and a lovely story being told through the group performance. Ellen (Y7) was awarded best costume and Millie (Y10), Evie (Y8) and Issy (Y10) were awarded special prizes for their stand out contributions.