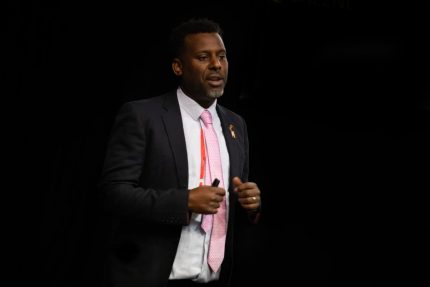 Sixth Form students from Colfe’s School were joined by the Right Honourable Stuart Lawrence for a thought-provoking talk about the impact of his brother Stephen’s death, his legacy and his own motivational work with young people.

Stuart Lawrence, former secondary school teacher, mentor and younger brother of Stephen Lawrence – who was murdered in a racist attack in Eltham in 1993 – spoke movingly to pupils about the day his life changed at the age of 16. His brother’s death was a traumatic and defining moment for him: “I had to make some decisions about my life and its direction. I wanted to make sure that the world young people are growing up in was better than the one I grew up in.”

During the talk, Stuart shared his feelings of loss at his brother’s death by asking pupils to visualise a person or moment that gives them happiness and then asking them to imagine how they’d feel if that was taken away. He spoke about the importance of being respectful to others, treating people as you’d like to be treated – his mother’s ‘golden rule of life.’ He urged pupils not to get caught up in television, mobile phones and social media, but to take time to read and reap the benefits of working hard.

Stuart also touched on recent events impacting the lives of black people following the death of George Floyd in the USA and the lasting impression made on him from meeting Nelson Mandela at the age of 16: “He sacrificed 27 years of his life for the people of South Africa and was an amazing man who spoke with grace and acted with dignity.”

Stuart’s hope is that his talks with will make a difference to the way people think and act – and ensure Stephen’s legacy remains in the public eye. The Stephen Lawrence Charitable Trust, The Stephen Lawrence Centre in Deptford, bursaries to help students study architecture at university (Stephen’s career choice) and mentorship schemes are all a fitting testament to his memory. Stuart’s motivational book Silence Is Not An Option due out in April 2021, aimed at helping children and young people make the best decisions they possibly can.