Colfe’s pupils Return to the Forbidden Planet for next production 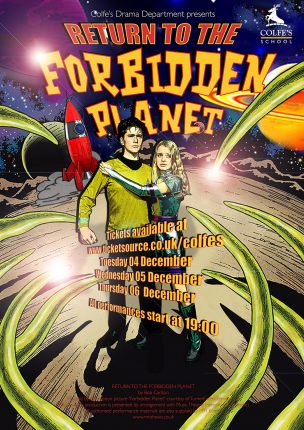 The newly refurbished Beardwood Theatre is transforming into the Starship Albatross for a Senior School production of Return to the Forbidden Planet. Running from 4-6 December, this jukebox musical is based on The Tempest and the 1956 science fiction film Forbidden Planet – and is often thought of as ‘Shakespeare’s forgotten rock and roll masterpiece’.

The cast of actors and singers comprises pupils from Years 10-13, along with a team of Year 9 dancers aptly named The Planettes. 1950s and 60s musical classics, including Great Balls of Fire, The Young Ones and Shake, Rattle and Roll, will also be performed live by a pupil band formed especially for this production.

Director of Drama Natalie Maher said “It has been an absolute joy to work on this production – and with such a brilliant group of performers. Many have recently achieved Merit or Destination for their Bronze and Silver medals in Grade 6/7 LAMDA examinations and a number of others were invited to join the National Youth Theatre earlier this year. We’re very lucky to have so many talented pupils at Colfe’s. Many thanks also goes to my team for their hard work; Musical Director Gary Sycamore, Theatre Technician Ben Freer and production support Charlotte Westrip.”

We are delighted to welcome pupils, parents and members of the community to join us for what promises to be an evening of high-energy entertainment. Tickets are available to purchase now at www.ticketsource.co.uk/colfes.