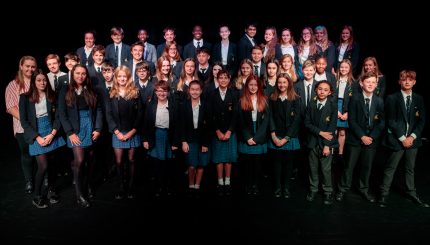 Colfe’s is celebrating another successful year of LAMDA (London Academy of Music and Dramatic Art) results. The exams – which took place over the summer – saw over 94% of pupils achieving a Merit or Distinction.

Pupils from Y7-13 took part in LAMDA lessons during the year, stretching and challenging themselves in a range of areas from public speaking to mime, reading for performance to speaking verse and prose.

Director of Drama Mrs Maher said “We were overjoyed to receive such a tremendous set of results. Our students this year have set a new record, which is a fantastic achievement. We are very proud of all our pupils but a special mention should go to the nine pupils who achieved Grades 6 and 7 Bronze and Silver medals. Praise must also to Mr Leggo and Mr Gregg for coaching the students through the process”.

Gigi (Y13) commented “I took the Grade 7 Acting LAMDA – and it has really helped me to develop my onstage presence which is particularly useful when applied to my drama A-level studies. I especially enjoyed discovering new pieces of theatre and studying characters in depth. I intend to pursue a further education in acting, so this experience has been very beneficial as I work towards this goal.”

Information about LAMDA classes at Colfe’s in Poetry and Prose, Acting or Musical Theatre can be found here. Any pupils who would like to begin classes should contact Mr Leggo in the Drama department as soon as possible.