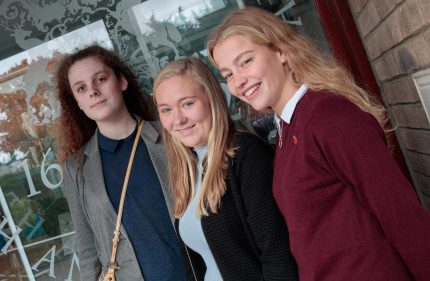 Three Year 13 students have been awarded a Distinction in the Mathematical Olympiad for Girls. Congratulations to Lara, Simone and Eddy for their exceptional performance in the United Kingdom Mathematics Trust competition. As a result, Eddy is the first Colfe’s student to be invited to sit the highly prestigious British Mathematical Olympiad paper.

The Mathematical Olympiad for Girls is aimed at those in Year 11 and above with the aim of encouraging as many girls as possible to get involved in advanced mathematical problem solving. The paper lasts two and a half hours and consists of five challenging mathematical problems for which full written solutions are required. Colfe’s put forward seven Year 12 girls and four from Year 13.

Head of Mathematics Antoine Guy said “This is a fantastic achievement for these exceptionally gifted young women – we hope their success inspires other pupils to take advantage of the enrichment clubs on offer and see how fun maths really is.”