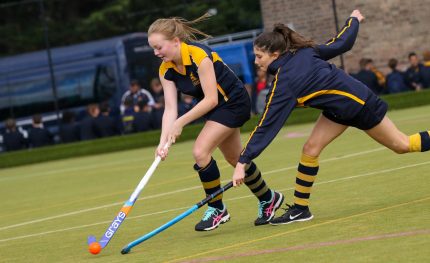 It’s been a great year for hockey at Colfe’s. As well as increased participation, more teams and more success in school fixtures, we also have record numbers of girls taking part in hockey outside of school, at clubs and in the England Pathway. 12 pupils were selected for the Junior Development Centres, with eight of those being selected for trials for the Kent squads.

One of these pupils, Lily (Y11), has been taking part in the Kent Hockey County Academy since September and has now been selected for the U16 County Side.  The squad of 20 players will play four matches against, Middlesex & Hampshire, Surrey, Berkshire and Buckinghamshire over the coming two months.

Lily said, “I am absolutely thrilled, hockey is such a huge part of my life and it is an excellent way to balance out my academic studies.”

Nicci Rayes, Director of Sport at Colfe’s said, “We are really proud of the opportunities we are able to give girls such as Lily through our connections and sport facilities at Colfe’s. We recently had Grace Balsdon, English International Field Hockey Player, visit us to deliver hockey sessions for our pupils.”

Hockey is the core sport played in the Autumn Term for girls. Regular, friendly fixtures are played mid-week and some Saturdays during the term.