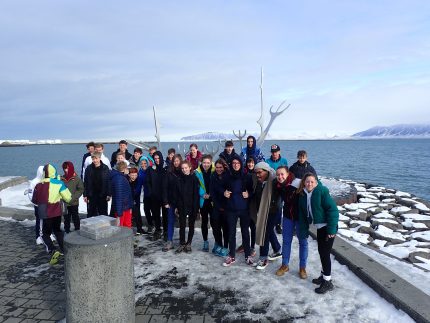 Some of our Colfe’s pupils were lucky enough to travel on two educations trips over the Easter break.

A culturally enriching visit to Paris was enjoyed by Year 11 and 12 students. Mrs Biggs and Miss Roberts accompanied the linguists on visits to the Musée d’Orsay, a backstage tour of the oldest cinema in Paris (The Grand Rex), a boat visit down the river Seine, a peek inside the Sacré-Coeur as well as a backstage tour of L’Opéra Garnier!  Mrs Biggs said, “The trip was undoubtedly a huge success. We also feel thankful also to have seen Notre-Dame in its reigning glory before the tragic fire only two weeks later.”

Snowy scenes greeted pupils in Years 8, 9 and 10 on a field trip to Iceland.  Mrs McAuliffe accompanied the Geography students on the trip which included visiting the outstanding natural beauty of the Gullfoss Waterfall in the Golden Circle and witnessing the eruptions of the Stokkur Geyser.  A tour of Reykjavík was rounded off with a warming dip in a hot outdoor pool and hot springs in the Secret Lagoon.  Mrs McAuliffe described it as, “a memorable trip of a lifetime where the students and teachers alike enjoyed the activities tremendously, from caving in a lava tube to sitting in 42°C hot springs in the snow.” Elizabeth (Y10) said, “Iceland really was a fantastic opportunity and I had the best time!”