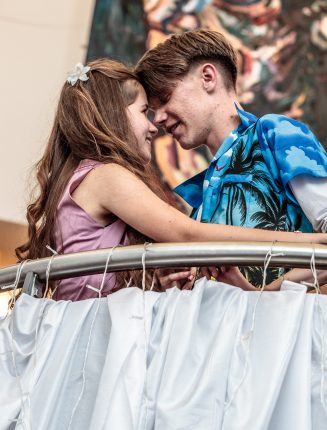 Not in fair Verona but in Colfe’s very own school grounds, Senior School pupils put on the school’s first ever promenade performance.

Taking inspiration from the film adaptation of Romeo and Juliet by Baz Lurhmann, more than 90 pupils auditioned for the production with 60 pupils from Years 7-10 taking roles in the cast, chorus and backstage.

As a promenade performance, the audience were able to move around the multiple scene locations and amongst the actors. The infamous prologue became a news bulletin televised on a large outdoor scene; the Senior School playground innovatively converted into an open-air theatre; and the Beardwood Atrium dressed with extravagant drapes to replicate the Capulet’s masquerade ball.

Director of Drama Natalie Maher said “It has been a joy to work with such an enthusiastic group of pupils and teachers, both on and off the stage. I am very proud of them all. This was ambitious an idea but we really have broken the mould with this production. Many thanks go to my colleagues Mr Gregg, for building a magnificent set and providing all things technical, and my co-director Ms Sutherland – without both this vision would never have come to life. ”

Headmaster Richard Russell said “The promenade production of Romeo and Juliet was creative and inspiring in equal measure. The cast (60 strong) responded magnificently to the challenge of Shakespeare’s language and the audience followed the cast around the school as the production moved from one location to the next. All the lead and supporting parts were played with such consummate skill that it would be invidious to select individual pupils for special mention. The tributes at the end of the final night were entirely appropriate and we reiterate our thanks to Richard Gregg who leaves at the end of this term after many years as drama teacher and lead technician. Thanks also to the directors Ms Sutherland and Ms Maher for whom this was a fitting finale to a wonderful first year in the Colfe’s theatre.”