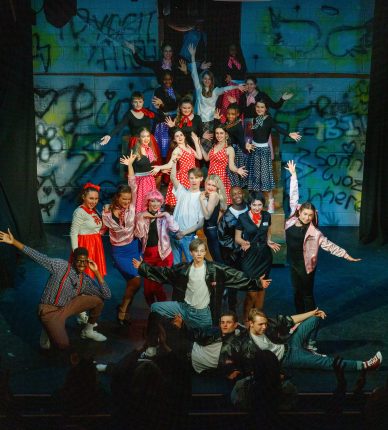 A cast of Colfe’s pupils lived up to expectation by performing an energetic interpretation of the musical blockbuster, Grease. Staged in the Beardwood Theatre in front of a small, socially distanced audience of parents, pupils gave the show a new lease of life bringing Rydell High to this corner of south east London.

The love story of greaser Danny and goodie-two-shoes Sandy is a beloved classic – the score is a musician’s delight with songs including ‘Summer Nights’, ‘Greased Lightnin’, ‘Hopelessly Devoted to You’ and ‘You’re the One that I Want’.

Everyone who participated in the show – from the lead actors, to supporting cast, to those involved in set building and lighting, music and overall direction – deserved the thunderous applause of the audience.

Director of Drama, Natalie Maher, said “It has been an absolute joy to work with such an enthusiastic and hard-working group of talented students both on stage and behind the scenes. We are proud of you all. My thanks goes to Gareth Morgan for building the set, co-directors Danielle Sutherland and Charlotte Westrip for their dramatic vision and Tim Newberry and Benedict Holmes from the Colfe’s Music Department.”