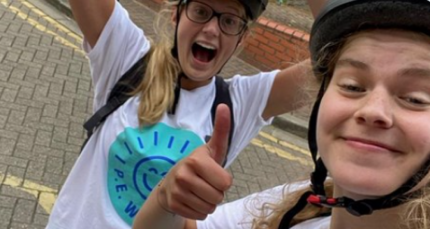 Over the last year the Colfe’s community has undertaken an impressive amount of fundraising to support local charities during the pandemic.

In recent weeks Colfe’s parents Sujan and Bandana Katuwal, have reached the amazing target of giving out 100,000 free meals to NHS staff, the homeless and those in need. As owners of Panas, a Nepalese restaurant in Lewisham, they have provided meals to care homes, community centres and homeless projects during the pandemic. Initially they funded much of the giving themselves but they launched a fundraising campaign to enable them to continue. They have received high-profile support from the actress Joanna Lumley, who is the Patron of their charity Panas Helping Hands, and appeared in national and local news for their incredible efforts.

Mr Katuwal said: “My wife had the idea and once we started we never looked back. Our local homeless centre is close to our heart and we hope to cook nutritious meals for many years to come.”

Also supporting those in need, Year 13 pupils Ella and Georgia completed a 50k charity walk to raise funds for the Lewisham Food Bank. Walking in and around London over one day, they raised an incredible £1,617, which has been matched by the Leathersellers’ Charitable Fund to take the total amount donated to £3,234. The girls completed their sponsored 50k charity walk over February half term and donations far exceeded their original target of £150.

Ella and Georgia said: “We set a goal for £150 as that is what it costs to provide a week’s worth of food for three families. Demand for food banks had grown and we really wanted to do something to help local families in need. We’re delighted with how much we’ve managed to raise.”

A group of Colfe’s parents and children have also been supporting an initiative called Feed the Frontline to provide NHS staff working in Critical Care and ICU with meals, snacks and drinks. Donations have so far allowed parents to make nine deliveries covering Lewisham Hospital, Queen Elizabeth Hospital, Woolwich and Darent Valley Hospital in Dartford.

Parent organiser Mrs Jiggens-Johnson said: ”Many NHS staff are working long hours because of Covid-19 and this initiative is a fantastic way of raising morale and thanking them for all that they do.”

Each food parcel contains shop bought and home baked food. To make the food parcels even more special, pupils from the Junior School have drawn pictures and included notes of thanks to put a smile on the faces of our frontline workers.