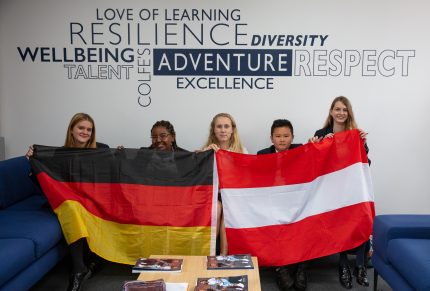 Colfe’s marked the European Day of Languages with a packed day of cross-curricular lessons and activities aimed at celebrating the benefits of language learning.

Our younger pupils in Junior School took part in a ‘show and tell’ session bringing in an object or story book from another country and singing a song in another language.

Departments across the Senior School organised an impressive range of activities to broaden pupils’ language skills, including:

To round off a perfect day of activities, everyone had the chance to sample a lunchtime European menu and participate in a languages-based virtual escape room during form time.

Mr Koutsakis, Head of Modern Languages said: “Learning a language has so many benefits, it builds communication skills, connects you to other cultures, is rewarding and fun.  A big thank you to everyone who was involved in putting together a great programme for our pupils.”

The European Day of Languages is a Council of Europe initiative and has been running annually since 2001.