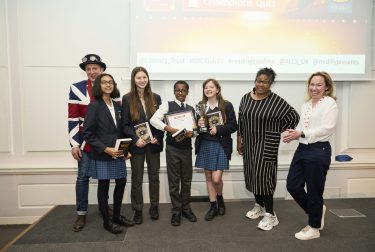 Following Colfe’s win at the SE London regional quiz in March, a team of four pupils from Years 7 to 9 have gone on win the National Reading Champions Quiz 2022.

Amabel (Year 9), Natalie (Year 8), Leila and Jackson (Year 7) joined 22 schools from across the UK at the Royal College of Nursing for eight intense rounds. The questions featured books set around the world, books set in different historical periods, books set in schools, food in books, prizewinning books, last lines of books, a picture round featuring book covers and a round on recently published books.

Head Librarian, Henrietta Englefield said “When the results were announced we were delighted that our team was placed first – this has been a great year for book quizzes at Colfe’s. All the pupils in the squad have worked really hard and been an absolute pleasure to spend time with.”

The pupils won a selection of books generously donated by publishers and also had the opportunity to hear in person from Patrice Lawrence, a prize-winning author whose books are popular in Colfe’s Library.