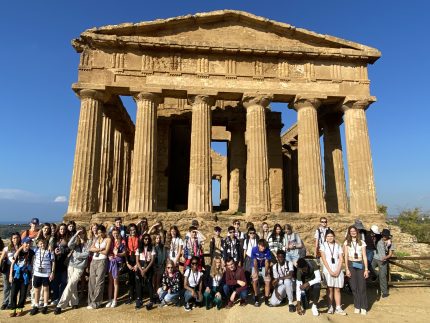 Keen classicists and geographers from Years 8-13 enjoyed a fascinating and exhilarating trip to Sicily during half term.

Over six sunny days packed with activities, the group of 46 pupils explored the enthralling classical history and dramatic landscape of the island. Covering some of the most important archaeological and geographical sites, highlights included visits to:

– the luxurious Villa des Casale, featuring some of the finest surviving examples of Roman mosaics

– the Valley of the Temples, one of the most extensive, representative, and best-preserved archaeological sites of classical Greek civilisation

– a tour of picturesque fishing villages and Acireale, the home of the oldest art academy in Sicily, and a visit to the Orsi Museum, one of the principal archaeological museums of Europe, featuring a treasure trove of prehistoric, Green and Roman artefacts.

– the incomparable Mount Etna volcanic site, as close as safety allowed, plus a hike to the crater of Vulcanello

– the stunning Greek amphitheatre of Taormina, dug out of the hard rock of Mount Taurus in the 3rd century BC

– Syracuse Archaeological park, featuring a wonderful collection of ruins of the Greek and Roman city of Syracuse.

After an absorbing few days, the trip was rounded off with – what else – a pizza-making class.

Harry Biggs, Head of Classics, said: “The trip to Sicily was an absolute highlight for the pupils. This amazing island offers a fantastic opportunity to explore unparalleled classical history and civilisation alongside unique geography. My huge thanks to colleagues in the Geography and Classics departments for organising such a special trip.”