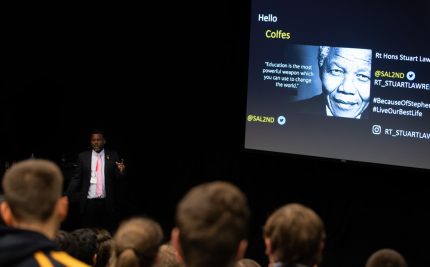 Colfe’s programme of activities to raise awareness of Black History began this term with a virtual assembly for pupils in Years 7-13 with Mark Lomas, Head of Equality, Diversity and Inclusion (EDI) at High Speed 2.

Exploring the concept of ‘unconscious bias’, Mark spoke passionately to pupils about how the unconscious beliefs and stereotypes people form stand in the way of social inclusion.

School captain and Leatherseller Scholar, Aleesha prepared a thought-provoking presentation for the weekly Year 8-11 Personal, Health, Social and Economic Education (PHSEE) session. Posing the question ‘What would our world look like without black people?’, she brought attention to the black scientists and engineers that time has seemingly forgot. Colfe’s parents are able to see this presentation in full on MyColfe’s. Aleesha also hosted a Senior School assembly – alongside PHSEE Coordinator and Media Studies teacher, Jason Tutu – to celebrate and acknowledge the achievements of key black figures in history.

Sixth Form students were joined by the Right Honourable Stuart Lawrence for a talk about the impact of his brother Stephen’s death, his legacy and his own motivational work with young people. Stuart, former secondary school teacher, mentor and younger brother of Stephen Lawrence – who was murdered in a racist attack in Eltham in 1993 – spoke movingly to pupils about the value of respect and making the best possible decisions.

Colfe’s well-established EDI Group, is soon to be be joined by a new African Caribbean Society run by Design and Technology teacher Yvette Bellis, in conjunction with Imperial College.

The catering team hosted a ‘Celebration of Caribbean Food’ day, serving a number of delicious options to pupils in both the junior and senior schools. The menu consisted of Caribbean bean soup to start followed by jerk chicken or chickepea and plantain curry, with rice and peas and Caribbean corn.

In the Junior School, Head Catriona Macleod began a series of assemblies this week. Starting with ‘Unknown black scientists’, Head of KS2 Victoria Welch will continue after the half term break with:

Year 3 and 4 will be attending a ‘Celebrating Black British Activism’ video workshop with East Side Workshops and Lynx House are leading the annual Wear Red Day on Friday (16 October) – a national day of action which encourages schools, businesses and individuals to wear red and donate £1 to help fund anti-racism education for young people and adults across the UK.