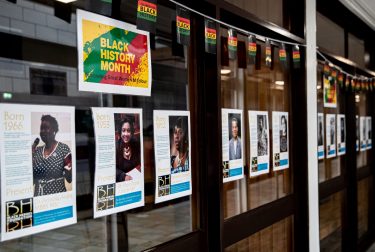 While Black History Month is celebrated in the UK during October, Colfe’s programme of activities to raise awareness of Black history continues throughout the academic year.

This term Rosie (Y13), Ashlynn (Y11), Justin (Y10) and Isis (Y10) led an assembly for Years 7-9 exploring how Black history is part of everyone’s history and spoke about their own personal Black heroes. Meanwhile in PSHEE sessions, form tutors ran a Black History Month quiz, which parents can view via MyColfe’s.

The History curriculum in the Senior School has been covering topics such as ‘Who were the Black Tudors?’ examining several ‘hidden’ Black figures from the Early Modern Period; and ‘Whose World War’ comparing different experiences of people of race in World War 1, including Jamaican pilot Will Robbie Clark and those involved in the Cardiff Race Riots of 1919. November’s Remembrance Assembly will focus on the Pilots of the Caribbean who fought alongside allied troops in the war.

In Design and Technology, Year 9 pupils have been working on a project inspired by the work of Nigerian artist Yinka Shonibare, and Trinidadian designer, Althea McNish.

In the Junior School diversity, inclusion and Black history have been embedded into the curriculum and pupils are encouraged to explore different perspectives within individual topics. Following the Black History Month theme of ‘Proud To Be’, Humanities lessons have looked at professional Black footballer and World War 1 soldier, Walter Tull, and the role of forces from the British Colonies in World War 2. Pupils in Year 6 have been studying great speeches of our time in English, including Barack Obama’s Selma 50th Anniversary speech and Martin Luther King’s infamous ‘I Have a Dream’.

This week, pupils and staff also had the opportunity to sample dishes from Jamaica. The catering team at Thomas Franks created a delicious menu consisting of Jamaican pepper pot soup to start followed by brown stew with chicken or callaloo and potato stew, finishing with a Jamaican fruit cake and custard for dessert.