Autumn Concert Back to Full Glory at St Alfege’s Church 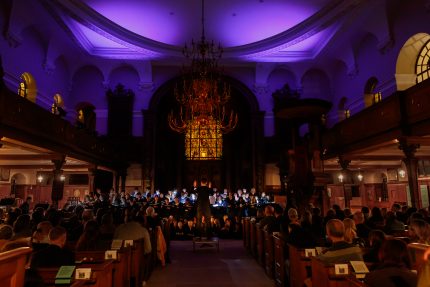 The splendour of St Alfege’s Church, Greenwich, was the setting once again for the Autumn Concert, a highlight of the school calendar. Featuring musicians and singers from both the Junior and Senior Schools, the concert culminated in a glorious performance of Bob Chilcott’s Circlesong.

Written in 2003 as a large-scale piece scored for upper-voice and mixed-voice choir, piano and percussion, Circlesong was inspired by the poetry of indigenous tribes of North America, which so often featured the image of a circle. Chilcott devised the work to represent the circularity of the life-cycle, symbolising the seven ages from birth to death.

After scaled-back events for the last two years, the magnificent surroundings played host to a full audience, who were also treated to string quartet, piano, and ensemble pieces by Elgar, Debussy, and Michael Nyman. Steve Reich’s Clapping Music was also performed with stunning precision by an ensemble from the Senior School, while the Hepplewhite and Rosen song Life was performed with gusto by the Junior School Choir.

The Autumn Concert is the school’s annual showcase where a large-scale choral work is usually performed, bringing together the Junior School Choir and Senior Choir. This year’s concert marked the first for Tim Newberry as Director of Music, who conducted the concert alongside Sheila Smith, Junior School Head of Music. The event saw the whole of the Senior school music department perform alongside other members of staff, and included involvement from Drama Tech students assisting with lighting.

Director of Music Tim Newberry said “I was honoured to lead this year’s Autumn Concert and the performance of the magnificent Circlesong was a thrill to conduct. I am enormously proud of all our performers, from the youngest Junior School pupils through to our A-level musicians. Every pupil involved was a credit to the Music department and the school.”

Deputy Head Donna Graham, who also performed as a member of the Senior Choir, said “We were delighted to be back with a full audience again in the stunning setting of St Alfege’s Church. The programme presented a fantastic range of style and perfectly showcased the commitment and talent of our musicians and singers, as well as the dedication and hard work of the Music department.”