Another record year for Colfe’s at A-level 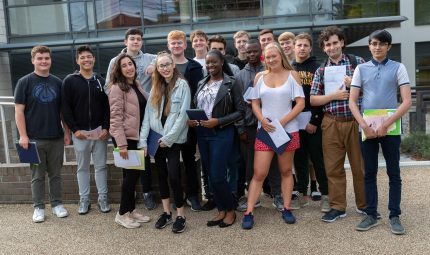 Colfe’s A-level students were celebrating a year of record-breaking success this morning with 82.5% A*/B grades and over 50% A*/A – bucking the trend against the national picture of top grades at their lowest level for more than a decade.

Among the many individual success stories this year were Simone Korsgaard Jenson, who achieved four A* grades (Maths, Further Maths Geography and Physics) and Imogen Porter, with three A* (Biology, English and Psychology). Simone, who will now go on to read Maths at the University of St Andrews said “I am really, really happy. I got the results I wanted. It’s such a relief!” Imogen, who is set to read Psychology at King’s College London commented, “I’m so happy. When I opened my results, it felt absolutely surreal – like I was in a dream. I know I couldn’t have worked any harder than I did.”

Leatherseller Scholar Akin Lasisi-Agiri  who joined Colfe’s in the Sixth Form from Addey & Stanhope School in New Cross, received three A* (Maths, Further Maths and Chemistry) and will be reading Maths at Warwick “It’s been a blessing, I couldn’t have done it without Colfe’s. It’s been an absolute pleasure spending my Sixth Form years here.” Fellow Leatherseller Scholars Vera Onongaya (who joined Colfe’s from St Ursula’s Convent School) achieved two A* grades and takes up a place to read Medicine at Cardiff and Popea Salisbury (Conisborough College) also achieved two A* and plans to do a Foundation year at Camberwell College of Arts then on to read English Literature at Queen Mary and Westfield College.

Oliver Whichello, who gained three A* (Further Maths, Maths and Physics) will be reading Maths at Durham. “I am very happy and surprised! I am so pleased to have a place at Durham.” Oliver’s father, himself an Old Colfeian, was equally delighted: “I am amazingly proud of Oliver’s achievement and a big part of that is down to Colfe’s.”

Headmaster Richard Russell said, “This is our best performance at A-level for some years. The proportion of top grades is well ahead of last year and our pupils have worked hard to secure places in their first choice universities. We look forward to hearing of their future success.”

The majority of Colfe’s students have secured places at their first choice university, including Russell Group institutions, to read subjects as diverse as Palaeontology and Evolution at Bristol, Music Composition at the Trinity Laban Conservatoire and Creative Lighting Control at Rose Bruford College. A number of students have also chosen to take up working apprenticeships in the banking and construction industries.