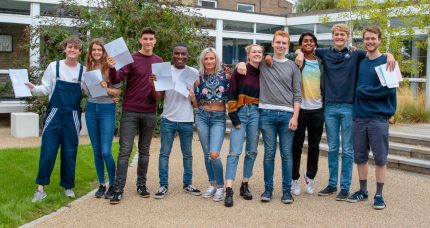 Colfe’s A-level results continue to go from strength to strength with 79% of students scoring A*/B grades and 47% achieving the top grades of A*/A this year – almost twice the national average – at a time of significant change amidst toughening exams and marking structures.

Such success means that the majority of Colfe’s students have secured places at their first-choice university, including Russell Group instructions and Oxbridge.

Amongst the many individual success stories this year were Kate Drury and Max Hedley – who have both been at Colfe’s since Nursery – each achieving A*/A*/A, with Kate securing her place at Durham University to read Geography and Max at Exeter University to read Economics and Politics.

Kate said “I was really nervous about achieving the grades I needed so it is overwhelming that I’ve exceeded my expectations. I’ve been at Colfe’s since I was three years old – it’s been quite a journey!”

Max said “It is thanks to the support I received at Colfe’s that I’m going to read Economics and Politics at Exeter University. I’m so grateful to everyone who helped me get this far.”

It was a fantastic year for Colfe’s Leathersellers’ Scholars. Amy Ma, who joined Colfe’s Sixth Form from Deptford Green School, secured a place at Magdelene College Cambridge to read Architecture; Maria Mobio, also from Deptford Green, will be reading Mathematics at Selwyn College Cambridge and Jayden Gittens, who joined Colfe’s from Conisborough College, has a place to read Medicine at Liverpool University. Jayden said “Having started at Colfe’s just two years ago I feel privileged to be leaving with these grades and I am very excited for the future.”

Headmaster Richard Russell said “We were delighted to receive news of this year’s A-level results this morning. Pupils and staff are to be congratulated on some extremely impressive outcomes against a national back-drop of uncertainty about new specifications and mark schemes. Just under 80% of results were graded A*/B and almost half were A* or A. For the great majority of pupils their results will be a passport to their chosen university and we wish them well for the future.”