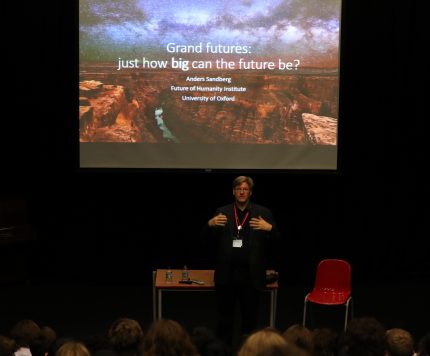 “The John Glyn Society lecture on 9 October was given by Anders Sandberg, a Swedish neuroscientist. Sandberg highlighted how his position in the Philosophy department at Oxford University was perfect for his insatiable desire for doing new things…particularly weird and wonderful research into the future of humanity. So often scientific studies or the news tell us that the future of humanity is bleak, short lived and that we will be causing our own destruction within a century. Dr Sandberg, however, argued quite the opposite.

He gave us an extremely optimistic and positive prediction of what the human race could achieve if we are careful, ambitious and make the right decisions now. He gave plenty of examples of how humanity could develop and extend across the galaxy and maybe even the universe. Notably, he spoke of how the average time a species exists for is a million years, and how, given that we have already developed far beyond any other race, that by the time we reach that million-year mark we could have found a way to extend our species’ survival for hundreds of millions of years. He also talked about how the invention of Dyson spheres could lead to destroying planets (like in Star Wars!) and even moving stars (albeit slowly). Overall, it was a very entertaining and enlightening talk. It has encouraged me to take care of the earth and the humans who live on it, so that our future could be as amazing as he made it sound.”