A busy term of school productions at Colfe’s 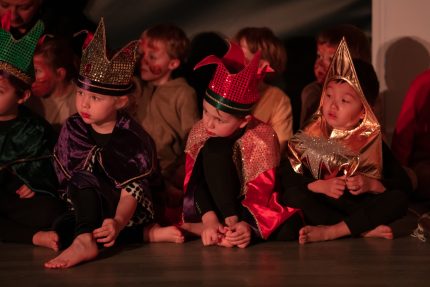 Pupils from Colfe’s entertained audiences with a number of drama and music productions last term. From our Junior School, EYFS pupils impressed with their heartening performance of the first Christmas in their Nativity. Years 3 and 4 performed The Greatest Snowman an all-singing, all-dancing, sing-a-long musical. Y4 showed us what they had been learning during their String Scheme sessions by treating us to some charming performances at their Teatime Concert, as well as a first performance by the orchestra. The KS2 Choir collaborated with the Senior School Chamber Choir for their beautiful and energetic performance of Captain Noah and his Floating Zoo.

A busy term concluded with a Winter Concert celebrating instrumental music at Colfe’s and our annual Carol Service at St Mary’s Church, Lewisham, where the Senior School vocal ensembles sang a programme of festive music including ‘Ring the Bells’ by composer Paul Fincham, who was in attendance at the performance.

The Drama department performed three fantastic shows of A Chorus of Disapproval, the classic Alan Ayckbourn comedy about an amateur operatic society where offstage politics messes with onstage performances. The cast featured some talented GSCE and A-level drama students and the technical crew was a mixed-aged group of students drawn from our Technical Theatre Club.