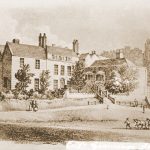 Looking at our modern buildings, it’s hard to believe Colfe’s is one of the oldest schools in London. Originally established by John Glyn in 1574, the school was re-founded in 1652 by the Reverend Abraham Colfe, Vicar of Lewisham.

When Colfe died in 1657, he took the enlightened step of entrusting the School to the Worshipful Company of Leathersellers in the City of London. Colfe’s original vision was to educate the children of ‘the hundred of Blackheath’ and although today our pupils travel to the school from all parts of South East London, a strong sense of local community remains, with most of the pupils coming from the Boroughs of Lewisham, Bromley, Bexley and Greenwich.

The School on the Hill, as it was known locally, stood on Lewisham Hill until 1944 when it was badly bombed. The pupils were evacuated to schools in Tunbridge Wells and Somerset and then spent many years in temporary accommodation before the school re-opened in 1964 on the site it occupies today. At that time it was a grammar school for boys, but Colfe’s became independent in 1977, thus ensuring the continuance of its tradition of excellence. Girls have been admitted to the Sixth Form for 30 years, and the school has been fully co-educational since 1999.

The school continues to move forward. In the 1990s we built what is now the Junior School, which educates some 450 children from 3–10. Since then we have added an all-weather playing field and the Beardwood Centre, which provides state-of-the art facilities for Art, Music, Drama and Media Studies. In recent years we have greatly expanded the space for EYFS and Key Stage 1 and opened The Stewart Building, a dedicated centre for the Sixth Form.

The aims of Colfe’s School as determined within the strategic plan are:

Colfe’s was reviewed by The Good Schools Guide in April 2021, you can read the review here.

At Colfe’s you don’t just learn, you learn for life. There’s always something fascinating to find out, something new to try.

Performances and exhibitions punctuate the year in all parts of the school. You will have the chance to find and develop your creativity in all these subjects and at every level.

We compete in netball, rugby, hockey, swimming, cricket (for boys and girls), football, athletics, cross-country, tennis and biathlon – all are open to every pupil.

Learning is an adventure. Our dedicated Outdoor Education Department will teach you skills that stay with you for the rest of your life.

To us, you are a person, not just one of a group. We get to know you, what you need to learn, to grow and to make you happy.